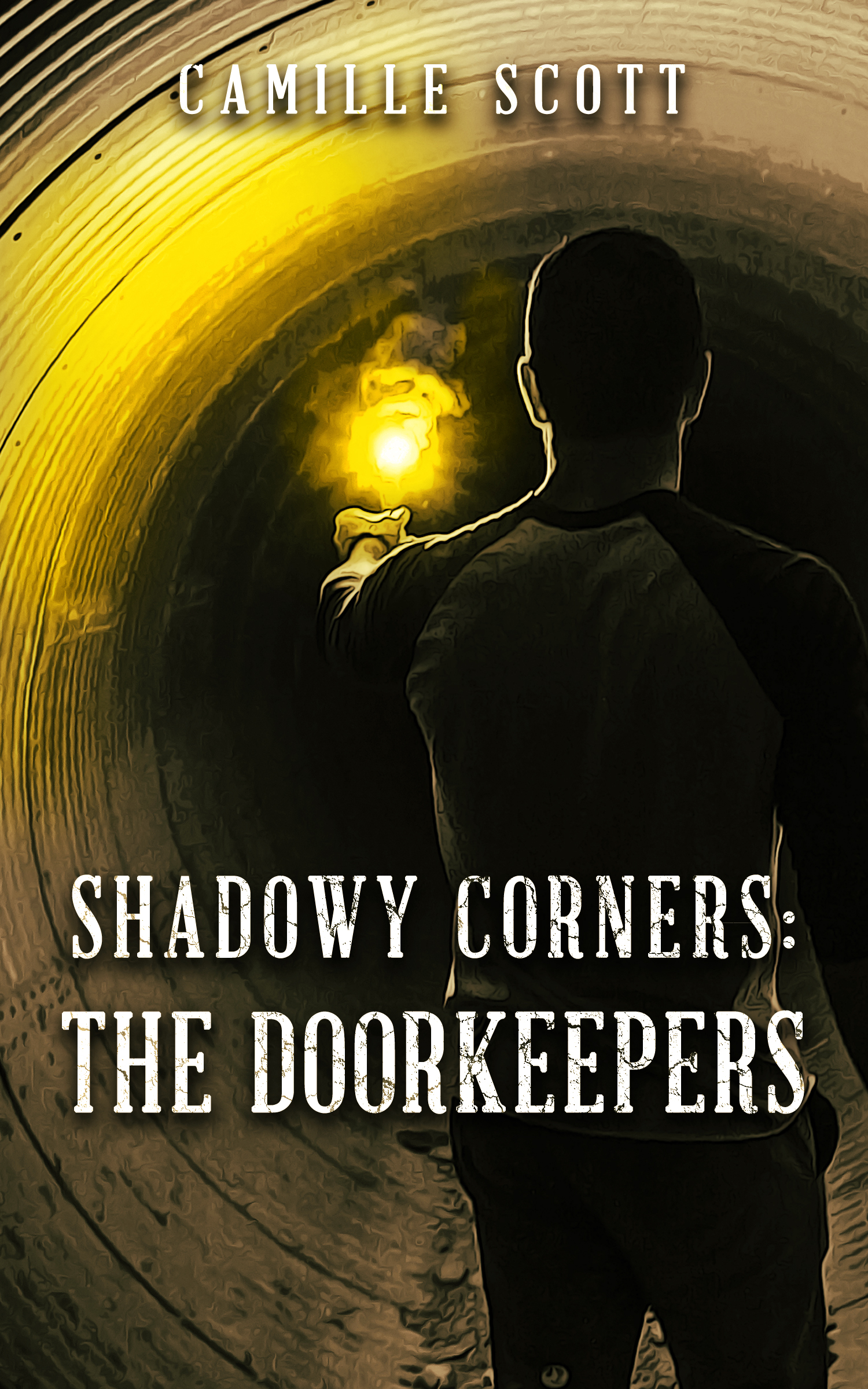 Marko’s essence flowed back into to his body, concealed on the roof a nearby building. Projecting his spirit into the gypsy encampment with enough solid looking detail to convince them that he had actually walked into their midst had required intense concentration and the expenditure of a great deal of energy. The level of exhaustion he now felt was paralyzing.

On the street below, the sound of shouting echoed off of nearby buildings as the male members of the Roma clan marshalled themselves for a thorough search for him. Marko was far too weak to outrun anyone. Magic of any kind was out of the question. Instead, he conserved energy by lying still and slowing his breathing to steady his heart rate.

Marko emptied his mind. Expelling energy on frenzied thoughts would be like broadcasting a signal for the leader’s tracking spell to pick up. Night gradually faded into daylight while the men frantically searched for Marko, never suspecting that he lay in a near catatonic state right across the street from their encampment.

Three men were dispatched to the hotel room he had shared with Janet and Andrea. Finding it empty, they scoured the neighborhood. One of them rushed into the church, but the pastor had already ushered Andrea and Janet into his office. The sight of Janet’s injuries had so alarmed him that, he insisted on breaking out his first aid kit and dressing her bleeding wounds. They thanked him and declined his offer to get them into a nearby shelter. Janet and Andrea emerged from the office, after the men had hastily walked through the chapel bathrooms. They decided that the sisters weren’t hiding out in the church and moved on.

Unaware of the peril they narrowly missed, the two of them walked to the rear of the chapel and sat in the last pew. Marko had been gone for several hours. They were beginning to worry. Janet’s reached up and gingerly touched her aching neck. Her sister placed a concerned hand on her shoulder.

“Are you okay Janet?”

“When Marko told me that you had snuck out and we found you bleeding, I was mad at you for almost getting yourself killed. ”

“Really Andrea? Everything I do pisses you off. Silly me for thinking you might actually be concerned for a change.”

“Come on Janet, admit you snuck out in the middle of the night and went to that phony baloney psychic just to spite me.”

“Wow! It never ceases to amaze me, how self-centered you can be. Did it ever occur to you that maybe I have a lot on my mind? I was so desperate for someone to talk to, that I was willing to turn to a stranger.”

“Well that makes no sense. You’ve got me to talk to.”

“Don’t make me laugh. Whenever I try to talk to you about my feelings, you tell me to get over myself. And don’t even think about trotting out that lame excuse that as my big sister, it’s your job to stop me from wallowing in self-pity.”

“Well excuse me, if I get annoyed listening to you drone on and on about your first world problems. It’s a little hard to sit still, while you whine about not getting promoted, when I’ve just lost my job. Or how about the time you went off on a rant about the car dealership ordering the wrong shade of red for your new car, when my clunker of a car was about to give up the ghost?”

“That’s not fair Andrea! You act like that’s all I talk about. Besides, it’s not my fault you refuse to get it together. You’re the older sister, yet I’m always having to take care of you.”

“And you love every minute of it…rescuing me and getting to be the good daughter.

Our loving family never lets me forget what a disappointment I am. ”

“If you don’t like it, then do something about it!”

“I am trying Janet. When you have bipolar disorder…”

“Oh here we go again, whenever you feel yourself losing ground in an argument you play the mental illness card. If you would just stay on your medication…”

“I keep telling you, that stuff is very addictive and I don’t like the way it makes me feel. I’m trying to get things under control on my own.”

“And how has that been working for you?”

Andrea abruptly stood up in the pew, poised to storm off. Janet opened her mouth with a sarcastic comeback on the tip of her tongue. It was true, she didn’t understand why Andrea refused to behave responsibly. As an adult, Janet regularly had to do things she didn’t want to do. That was part of being an adult.

It wasn’t rocket science. Whatever way the medication made her feel, it had to be better than the manic episodes that made her spin out of control and end up in trouble with the law. Janet had never understood that about her sister. Frustration needled her. She wanted to grab her sister by the shoulders and shake some sense into her. Janet looked up and saw the defeated slump of Andrea’s shoulders. A sudden twinge of guilt made her pause. Maybe, Janet was also guilty of refusing to listen.

She said softly, “I want to understand.”

Andrea had turned away from her sister’s scornful expression. Now, she heard the change in tone and turned back towards Janet. Andrea felt a surge of hope. There were so many things she wanted to express. Andrea was at a loss for the words which would convey her struggle.

“I know my medications are supposed to even out the peaks and valleys of my moods, so I don’t soar so high that I’m out of control and don’t plunge into the depths of despair. It does that… a little too well.”

“I mean the medication flattens everything out so much that I can’t feel anything. Do you know what it’s like to feel empty?”

“No, but I have to say it doesn’t sound horrible. I’ve always been such worry wart. Anxiety keeps me on edge. I worry about making mistakes. For me, trouble is always on the horizon. When things are going well at work, I’m convinced that something bad is going to happen and I’ll be demoted or lose my job. When things are bad, I’m convinced that it will never end. Even though you drive me crazy, I worry about you when we are apart.”

“I never knew all that.  You always seem so sure of yourself, so in control.”

“Being in control helps me keep my anxiety in check. That’s why this little… adventure has been so nerve-racking. There’s no way of knowing what will happen next or if I’ll be able to handle it. When that…thing attacked me and drained away my fear, it was the most rest my mind has ever had. When I felt the return of the first stab of fear, after all that peace of mind, it freaked me out. I tried to talk to you about my feelings earlier and we wound up arguing. Fear was really weighing on my mind. I couldn’t sleep. That’s why I snuck out to see Esmeralda.”

“I guess that’s where we differ. I cherish my emotions. Facing down fears is exhilarating. It’s better than the emptiness that my medications bring. I would rather be depressed than empty. It’s like being dead. I feel nothing…not happiness…not fear…not sadness…no anger…before long, you start thinking that I might as well be dead.”

“It’s the truth. You wanted to know why I won’t just take the medication.”

Marko entered the church so quietly, he seemed to materialize behind them. They both jumped and then laughed hysterically, relieved to have an excuse to take a break from such heavy emotions. Marko looked from one to the other in bewilderment. Andrea laughed even harder.

“It’s a long story. Glad you’re back in one piece Marko. What did you find out?”

“Which do you want first, the bad news or the worst news? Someone has put a price on our heads. That means we’ll have to deal with more attackers than Charles and his minions. If all that isn’t bad enough, someone clued this group in on our whereabouts.”

“What do you mean by group?”

“The possessed cat belongs to a group of gypsies who practice the dark arts.”

“I don’t know them, but I know of their kind. They act as supernatural bounty hunters.”